Despite disruptions and economic headwinds from COVID-19, the space industry has been resilient and even made tremendous progress in 2020. While no one could have predicted what happened in 2020, the key trends we outlined back in 2019 still hold and we believe they will continue to play out in the New Year. These trends include the growing importance of national security for commercial space and the continued growth of low-earth orbit (LEO) constellations. Startups SpaceX and Rocket Labs made launch more affordable and available, opening the door for more smallsats collecting more frequent and diverse data from space. At the same time, Space Situational Awareness (SSA) and debris have become more pressing issues as space becomes a more crowded and contested domain.

Recent conference discussions and company earnings show a vibrant industry with high level of government and commercial activities. Moreover, investor interest in space continues to grow, bolstered by public enthusiasm over space exploration and progress made by high profile players such as SpaceX. Indeed, 2020 is on track to be another record year for venture capital investment in space.

Rather than slowing down the industry, the pandemic has instead reinforced space as a foundational enabler to our everyday activities, ranging from internet connectivity for remote working, learning to telemedicine, as well as mapping, navigation, tracking and monitoring critical assets and planet earth. In fact, space technology has become key to solving some of the most urgent problems, like climate change, facing our generation  today.

Below we provide a summary of Space 2020 Year in Review. Stay tuned for our 2021 Predictions.

Investor appetite remains strong and growing; rise of the SPACs. 2020 is on track to be another record year for venture capital in space, the Seraphim Global VC Index shows Q3 investments bouncing back to nearly $3 billion after a slight dip in Q2, with Q4 looking very strong on the back of transactions already announced.  In the public equity market, over $1 billion has been raised through the end of Q3 with close to $640 million raised in Q3, including a $460 million follow-on offering from Virgin Galactic. Special Purpose Acquisition Companies (SPACs) are gaining momentum in the space sector with two startups announcing their merger. AST & Science, a Seraphim portfolio company, is building a network of cell towers in space connecting directly to smartphones. Momentus is a space infrastructure startup. Both companies are going public through SPAC at >$1 billion valuation each.

Investment shift more to data collection and software analytics. Upstream space hardware (launch and constellations) companies continue to receive most of the overall venture funding. According to the Seraphim Index, 65% of total VC was invested in constellation year-to-date, up from less than 50% a few years ago, as launch availability has improved and new constellations move closer to operations. Funding has become more concentrated with emerging leaders raising bigger rounds, while other “me too” smaller players struggle. The top ten deals accounted for more than 70% of total investments. Year-to-date, investment in software or companies that provide analytics or products from satellite data nearly tripled, funding startups focusing on location intelligence and insights from geospatial or drone data for industries ranging from Insurance, Agriculture to Energy.

Robust government support for commercial space. Government funding supporting commercial space became increasingly important during the pandemic when private investment slowed. While an increasing number of nations have launched their own space programs, US government space spending remains by far the largest driven by national security and economic interests. The US 2021 budget includes $18 billion for the DoD to fund the newly formed Space Force, and $25 billion for NASA. Over the last several years, the DoD and NASA have become important partners, sometimes acting as anchor customer, for many Space Tech startups as they actively engage and fund commercial innovation from early stage to commercialization. DoD’s areas of interest include satcom, space domain awareness, launch on demand, debris-removal, and in-orbit servicing, while NASA is fostering a robust commercial ecosystem in LEO and enabling deep space exploration to get humans to the moon and ultimately to Mars.

Key milestones validating leading LEO broadband constellations. Commercial LEO mega-constellations moved closer to operations in 2020 despite the pandemic negatively impacting the mobility market. SpaceX is leading the pack with the seven successful launch of Starlink satellites, a $2 billion oversubscribed equity round in August. It even won close to $900 million in government subsidies to bring internet to rural areas in the US. Meanwhile, OneWeb has emerged from bankruptcy with a $1 billion investment from the UK government and Bharti Global. Telesat has merged with Loral Space, providing access to public equity to finance its LEO constellation. The market received further validation with Amazon confirming $10 billion in investments to deploy a satellite broadband constellation. LEO broadband constellations still need to prove their business case, but they are here to stay and will be part of a flexible, resilient multi-orbit satellite communications network of the future.

Pandemic driving demand for geospatial data for asset tracking and monitoring.
While high profile companies such as SpaceX and Amazon attract all the media attention, Earth Observation companies have been busy delivering geospatial data and analytics/insights to support government and business during the pandemic, everything from tracking the spread of the corona virus and assessing its economic impact to disaster response. At the same time, remote asset tracking and monitoring based on satellite IoTs have become indispensable to industries during lock down while demonstrating significant value.

For example, Earth Observation companies such as Planet Labs saw its bookings double over the last two quarters as customers purchase more satellite data because they could not undertake site visits to monitor critical infrastructure during lockdown. Rezatec, a geospatial AI analytics startup, sees growing demand from Utility and Energy companies for automated inspection of powerlines, pipelines, and dams to scaling remote monitoring and automate trouble shooting of their assets. Satellite IoT companies such as Orbcomm expects higher demand for asset tracking and monitoring and sees the pandemic driving greater adoption of IoT solutions over time.

Rise of ESG; SpaceTech plays a growing role in fighting climate change. Satellite data usage to independently monitor and manage the risk of climate change and support first responders has accelerated this year with the pandemic. This is only the tip of iceberg as more data and sophisticated AI and computing become available. Governments and corporations alike are seeking to better understand the impact of climate change on earth and to map and measure risks of their assets, markets, and economy.  S&P Global's recent $44 billion acquisition of IHS Markit was driven by access to proprietary, alternative data like satellite imagery to help their clients better assess ESG (Environmental, social, and corporate governance) risks and opportunities. Several Seraphim portfolio companies (Spire, Iceye, PlanetWatchers and Bamboo Systems) provide geospatial data and solutions to analyze climate impact. For example, PlanetWatchers, a Seraphim portfolio company, uses AI powered all-weather SAR data to deliver rapid insights on natural disaster damage assessment to the insurance market.

Need for better Space Situational Awareness and debris removal becoming real.
The number of satellites in space is expected to grow exponentially, with 200 companies planning to launch more than 100,000 satellites in the coming years. As space becomes more crowded, increasing the risk of collision, companies providing Space Situation Awareness (SSA) and debris removal are gaining further government support and commercial traction. The 2020 US National Space Policy directs the Commerce Department to partner with commercial players to provide SSA and collision warnings. The Director of Office of Space Commerce recently discussed active debris removal as an emerging commercial opportunity for the private sector, while the government focus on monitoring and risk mitigation.

Two of Seraphim’s portfolio companies are active in SSA and debris removal. LeoLabs is building a global network of radar that can track small debris the size of a pebble. It has been supporting SpaceX this year by providing timely and accurate tracking data of its Starlink satellite launch. D-Orbit successfully completed the world’s first space “taxi” mission of delivering all Planet’s SuperDoves satellites in the precise orbital destination this year. Longer-term, the company plans to leverage the same space taxi to perform secondary missions such as debris removal and in-orbit servicing after delivery of its passengers.

Groundbreaking Year for Space Exploration and Human Space Flight. Significant strides were made in space exploration this year with three historic robotic missions to Mars in July despite extraordinary challenges from the pandemic. The UAE was the first, followed by China and the US on missions to collect samples and search for ancient life. Last week, China completed its most successful mission and brought back to Earth the first new Moon samples in more than 40 years. Like the US, China wants to establish a base on the Moon to exploit potential resources and use it as a launch pad for Mars and other deep space exploration. NASA’s signature Artemis program aims to send humans back to the Moon by 2024, then to Mars.

SpaceX’s Crew Dragon also made history in November by launching four astronauts into space on a research mission to the ISS. This opened a new era of human space flight as it was the first time a private company, certified by NASA, launched astronauts into orbit, almost a decade after the US retired the space shuttle program in 2011.

Satcom mobility under pressure; $10B C-band upside for big 4 satcom operators.
For incumbent GEO satcom companies, satellite TV remains under pressure as consumer broadband held steady with most people working from home. However, mobility (In-Flight-Connectivity (IFC) and maritime), a key growth driver, has been in the dumps due to the sharp decrease in air travel and cruise holidays. Post-COVID, it is expected to return to growth.

The big four GEO operators are pursuing different growth strategies with Intelsat’s acquisition Gogo’s in-flight broadband business, SES’s cloud partnership with Microsoft Azure Orbital, ViaSat’s plan to deliver the most affordable bandwidth with ViaSat 3, and Eutelsat’s expansion into consumer broadband with the launch of its new satellite and the acquisition of BigBlu Broadband. They will soon have to figure out how to coexist or compete with the emerging LEO broadband constellations.

The good news is they are expecting incentive payments of $10 billion+ from the auction of their C-band spectrum in the US for 5G. This windfall led to a rebound of 12 GEO satellite orders to Maxar, Northrop Grumman, Boeing and Thales from Intelsat and SES. The infusion of cash from C-band auction in the coming years will likely drive more vertical integration and further consolidation in a rapidly changing satcom industry with increasing competition. 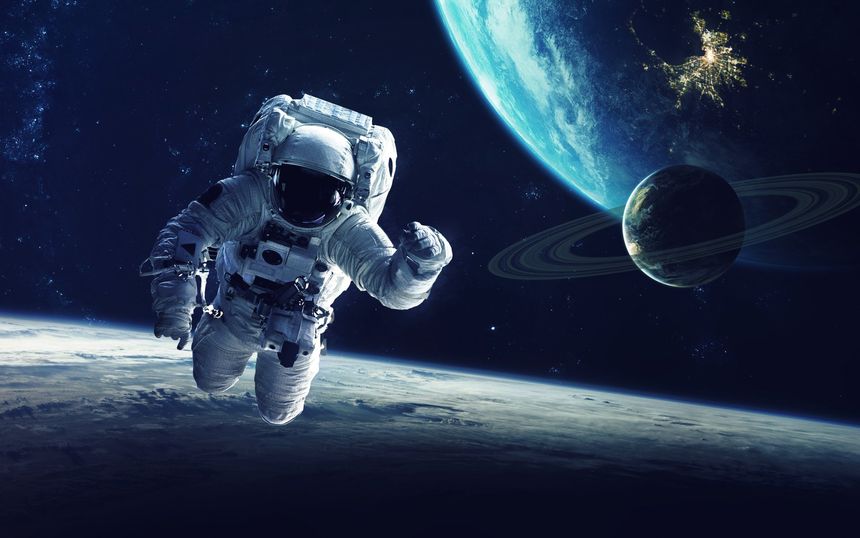